Fringe psychedelia bringing stepping stones disguised as biscuits & quantum layers fronting as fish & chips.  The carnival spins off with a lurch doing "Jail Time", a gazer ditty shifting quickly into a likely amphetamine induced rave up; a nice intro to what lies ahead. Vintage leslies colliding readily into a portage with cheesy (no pun intended) layers of melt flow forth from "Mean As Fuck" reminding me every bit of the haggard hags of me youth who got off on back handing the kiddos if anyone acted up, which was often.

All of far bearing fruit on the piss off "Bite It" which despite starting on a dirge gains speed, momentum and an almost undeniable force before we arrive at the minute mark. Soon as the churn gains what sounds like stabs at back-grounding, we are aloft in this virtual aeroplane, looking for a field in which to crash and readily burn. Sweet as honey and sour as shit. Sleeting sideways wrapped in raw bacon setting the scene for "Pills and Wine", which is famously known as both a good time and a fatal overdose.

Side one (or A3 as the anglish plainly state it so) ends for me with the straight scene out the window with "Sound Of The Underground" bringing visions of pogoing grimwallas strung out & broken down on the vintage. All said for side one I gotta say the numbers I give mean nothing as 5 goes to one to two to four and as I said ending on three.  A triumph of modern society indeed.

B side kicks off with the scene cleanser  "Talk, Drink, Bleach" which is always a torrid affair down on the skids of the old towne when the bobbies arrive to sweep the streets. The following "Mash Potatoes" could be a love song, or it might not be, and I'll stick closely betting on the latter.  Sounding every bit the bathroom scene we arrive at "Lightnin' Never Strikes Twice", a spinning dervish setting up closer "HIYW", an appropriate burner for the bonfire as the dancing continues all day and night, stopping only as the freakout reaches capacity or the patrons fall aside as the wired wind down after a night, or two, or three, of well earned merry madness. 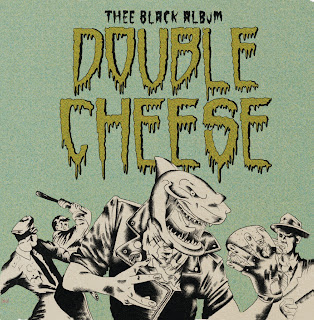