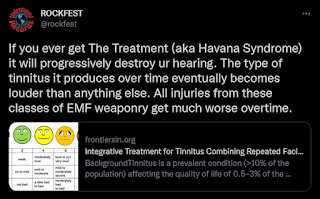 Damage to my hearing is the main reason I have stopped doing regulars of the Weekly Live At Underground Records (LAUGR) and the monthly Trip 248 shows.  It's also why I will be mostly concentrating on working on my own music in the recording studio, or anything else using sound as a vector.

These injuries, via The Treatment, both the brain injury related (hearing) and physical introduced or worsened ailments (see Issue 70 of the zine - http://undergroundrecords.org/archives/issue70/damages.php) are the largest impediments to me gaining employment, and have been for many years.

The hearing problems are probably related to brain damages which result from having electromagnetic weaponry such as used in The Treatment (aka Havana Syndrome which has been all over the news for years now) used on you.

Those severe hearing problems recently resulted in me having to turn down two possibilities for employment; one to do sound full time for a local club, and one to be the soundman for a band on tour.  I've also had to curtail, almost completely stop my work in the recording studio.

This type of tinnitus is completely different, as well as vastly amplifies the well known tinnitus you get when working with sound at significant volume over the years most musicians and sound guys can tell you about. It is progressive, as in gets worse, and goes far beyond the eeeeeeeeeee type screaming tinnitus sufferers complain about.

EMF produced tinnitus is way louder than anything else, and distorts sounds; it completely screws up frequency coloration and destroys enjoyment of even listening to music, much less working with it in a production atmosphere.

Forced exposure to EMF problems were listed on my applications for disability, the one filed in 2021, and EMF exposure was also listed on my 2014/2015 application.  Both denied, though the 2021 one (http://undergroundrecords.org/disability/index6.php) is particular in that is shows continuing nonsense by the US Government, both through it's arcane nonsensical SSI application and to the deeper fact that higher echelons in The US Government (those who are allowed access to the highest archives of classified material) knows all about the damages EMF weaponry causes, and not just from what it's own employees tell it, and the effort it has put into "understanding" WTF these weapons are.

It knows exactly WTF these weapons are and the damages they do. Because it not only has paid for production of this type of weaponry, some known to the public, but has many years of development of ALL KINDS of electromagnetic weaponry under it's belt. Much of it done in secret.  Some insights can be found as public knowledge, both in the weapons it states it turned down, such as Medusa (https://en.wikipedia.org/wiki/MEDUSA_(weapon) ), but also in the directed energy weaponry it touts, openly and freely, it has developed for war time use by its military. This includes surveillance uses of microwave weaponry like in filling/flooding techniques relative to things such as celldar.

From the beginning that it would tell you, the media, and the world, it doesn't know about these "mysterious" weapons supposedly used on it's employees; such uses and damages resulting in the way too limited "Havanaact" Papa Joe signed into law not too long ago, that it keeps up this charade via the media and denial of ANY help whatsoever to someone like me (who has far more multi-party witnesses than most of the employees of the G), some who are on video statements that have been openly available to the public for many years, in 2022 and beyond, is high level treason & criminality.

But I've been over all that, many times before and it's all available as public statements. I hope treatments such as listed in the science article at https://www.frontiersin.org/articles/10.3389/fnins.2022.758575/full can help not only tinnitus sufferers but those of us with what I call EM (Electromagentic) Enforced Hearing Damage (EEHD) which in the coming years you will hear about from individuals claiming to have "Havana Syndrome", which CAN BE VERIFIED by existence of very specific injuries. All of us deserve the best science can offer in treatments, because EEHD is a living hell.

On a side note, frequency manipulation is common today in audio and device fingerprinting (search audio frequency fingerprinting). Some of the drm uses include a type of surging of certain frequencies throughout a song, which it's claimed for many a listener cannot tell because it's "out of range". Well yes, many can, it makes songs imbued with it sound like total fucking shit to highly trained ears, especially through certain frequencies and multi-spectral resonance resulting therefrom, which is done on purpose.

My condition can pick that type of fingerprinting up right away.  Worse, many daws incorporate this type of "silent" fingerprinting.  Both need to stop.  I have found listening to such purposely manipulated shit via audio will make EEHD more painful than it already is. While seemingly it being done for drm purposes seems legit (drm can be done in a much more effective manner, this is street level greedy punk ass destructive shit), daws doing it, and other computer programs doing it when you do things like transfer or convert audio, especially without you knowing, are absolute crimes.

There will be lawsuits about this "silent fingerprinting" bullshit in the future, as there is a possibility it can be viewed as a sonic weapon, which may injure a person's hearing with exposure over time.  Mine was already injured before this type of finger printing via daw became common or I ever noticed it, now I can tell when MFers are using this type of fingerprinting quickly and easily.

If I was a audio equipment computer software/hardware developer I'd stay far away from this stuff. That includes owners who use this stuff in their "products and assets".   Millions of listeners catch on it won't matter how big of a gangster you are, related lawsuits could destroy a large part of multiple industries.