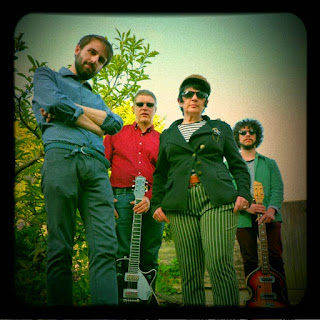 Rising above the plains in a plume of smoke rides the riff; glancing side views of a deep stone. It's telepathic so you don't even have to answer the phone or look at the email.  It comes upon you like a flush of cherry pepper fire after the taste buds have tempted the licking sauce which peeks out when it sees fit. All running down yer tayters filling each ear with distinct instrumentation. A more forceful pan I have not hear much since the late 70's Ted Templeman era. I just wanna fade things a bit to ease me ears.

Alas seems it is all split hard. But just the hard guitars. Otherwise the band tears it up pretty much each song.  It'll have a cool lead in there, some nice harmonies, great drive. A bit heady like those records you remember from the 60's.  Great go-go dancin' stuff.  OMO got the chops, a fine taste for reverb & solid songs.  The tinge of psychedelia in there is nice, it could definitely be the Yardbirds in more than one spot. A few others elsewhere.

Last song on the A side, Can't Get Over, is a mid tempo power blues number that shines well for Odd Men Out. It really pours on the overdrive adding force to already strong harmonies, with a couple tempo changes nudging up the arrangements into an interesting groove, full of jamming from start to finish. On the B side, Big Worries Big Troubles combines hard lead guitar throughout complimenting a driving rhythm section showcasing tight drum rolls & everything weaving together.  Odd Men Out fit as players together well, each instrument showing the skill of the musician in an open almost ad-lib at times framework of songs.  Not so much jazz but you hear it in there, as well as surf, garage and british invasion flavored rock.

The record improves sonically a bit as you go along and there's not really a lacking song too bad anywhere here. A couple drawn out yadas, but yeah it happens. The crazy go cat shows up for a spin on No. If there is nonsense for no reason, it is here. They finish it out rough shod with Knock On My Door, keeping the ambience thick as they jam off into the sunset. Outta 10 I give em a strong 7, maybe border line 8.