Had a discussion on Reddit, as many are on social media these last few years, especially with the Corona, about the cruelty that seems invasive in our basic society here in the US.

Cruelty has always been large in my nation.  It's based on individualism which has been in the fabric of the country since the first foreign settlers, to our nation as a whole going through phases of isolation to running the world.

Yet the cold hardheartedness of the individual has not ever been on display as it is today with things such as the pandemic and things such as arguments and acting out over wearing masks or opening schools, the the past almost four years of Donald Trump and the more than ever divisive political landscapes.

We are a nation of sociopaths, not as a majority, yet we have allowed mental illness, at least the cruel aspects of it as displayed in socio/psychopathy, to run amuck and over us, that non-hateful majority, for quite a while now, decades.

I have dealt with a small group of sociopaths over a long period of time.  It is famously gone through, the decades of abuse, in Issue 70 of the Underground Sound. 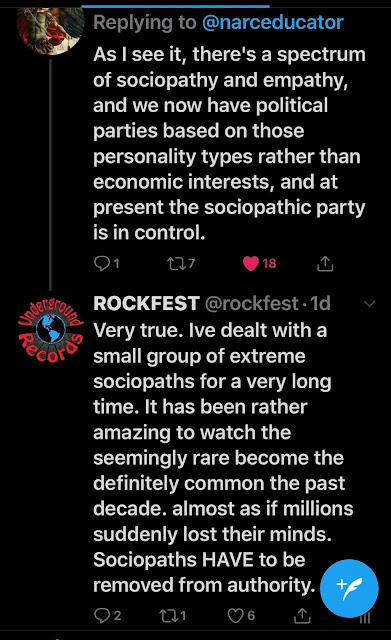