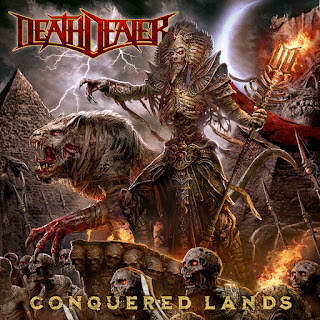 Ripping and roaring wide open out of the gate, Conquered Lands is like a battle tank on a rampage. Blazing blast beats and tons of jamming virtually every song. The band keeps it close to classic each number, and impressively fresh; battle cries of a modern age where heavy metal remains a literal religion, and the gods everlasting are recalled while a new stamp of real power is put out on the scene. Fans of Maiden and Priest will eat this shit up. Part of the reason why is this band is made of heavy metal OG's coming together to make this powerful sound. First off Ross The Boss is in this band, so everyone wondering what the fuck Ross The Boss has been up to lately, this is it. Also on guitar is Stu Marshall, who's been around with his bands Dungeon and Empires Of Eden.  It is the double attack of he and Ross which are the slash and burn time and time again. The bottom end, where the driving assault truly comes, Steve Bolognese puts on a helluva performance across the board throwing double bass, more double bass with a fluid top end, at times an almost hardcore snare beat with perfect timing.  There is nothing but incredible drumming on this album. Smoking! Mike Lepond on bass fills out this fantastic rhythm section, when they hit perfectly, which is often, it's amazing.

That's what I found one of the most enjoyable things about the album, just great music, and great playing from start to finish.  It really doesn't even slow down till the end is upon you, but maybe midways a time or two, then it's often still like Godzilla stomping through and burning your city to the ground.  Speaking of pure fire spewing breath, Sean Peck lays it down on this album best I have ever heard him. The music and musicians are great, and Peck just tops off this mind blowing display of pure metal power. His voice with a bit of the metal legends across a wide spectrum, you can hear a lot of the 'ol masters in there, yet it's all his own deal, the real deal, the pipes to push it strong when needed and the mastery to hold the notes throughout the entire scale, as real singers, rare as they are these days, are able to do when they are more than good.  You have this here.

When the band shows it's true strengths, on songs like Gone, you see the ability of this lineup to craft true music landscapes beyond the blast and fury of the terrorizing heavy metal war machine bringing lightening raids to your house which makes up the majority of cuts on Conquered Lands. The song speaks of war and the lives devastated by the hell that it is.  Of a soldier with the often suffering nightmare memories of having to kill, because in war, that's what you do, and the lives affected, of those he has killed and his own.  It touches on the guilt, the remorse, and the love he has for his own family, and suicide.  It's movingly powerful.

You get there right at the end.  Like I mentioned out of the gate with tracks like Sorcerer Supreme, the anthem Every Nation and the climatic Beauty and Blood, the onslaught starts early. Another metal gems for the ages, Running With The Wolves follows, blending fist pumping power chord risers, a sing along chorus, searing leads and Peck's telling you flat out, get in the mosh pit, go wild! Ending it all with a double octave scream. This is Death Dealer at their finest!  Worth the listen, worth the coin! Crank it louder and enjoy!