That there is a volume two is surprising to many (tongue N cheeky here).  Unless one understands the obvious inspiration Subsonics (sometimes called The Subsonics) have had over the many years. This collection of tributes is delightful to listen to, full of surprises, and a fitting dedication all around.

Ugly Sounds - I Can't Get Out kicks off the set with a true to original take. Like most of the cuts on the album the focus is on the punk stylings (punk style!!) of Subsonics, but there are definite detours, and nice ones they are (nice punks!!).  Those come a bit into the album though, because following is Kid Congo Powers  remaking I Made You A Clown, which is a bit more "alternative" with touches of a far away rockabilly flavor.  Transitions complete come track three Bang Bang Babies - Frankstein, a fuzzed out smooth flowing take ready made to float over the college airwaves of the 90's.

From there things get experimental with the excellent  See Thru Honda from Disturbios (haha yeah!).  It's like side one covered the various blood types, and considering this is a Subsonics tribute, that's cool and spot on in ways need considering when one talks of diversity. Punk is back though with The Mings blasting legendary Pretty Pills, another mirror in many ways of the original.  While cowpunk shows it's head, but with a touch of sweet not bitter on Wallacy Williams - Cruel Is The Night.

Side two kicks off in retro style with Oubliettes covering Shady Side Of The Street.  It could be Ritchie Valens day at the sock hop.  Not to be outdone, more 50's style but "hard rock" cuts in with an instrumental, Colt Cobra doing Red Rose.  Which since we've gone around the block now, it's expected and delivered the punks show up again, behaving, on Reptilians From Andromeda - Eyeball.

Next up we have Reptilians From Andromeda contributing Eyeball. True to form again, the simplistic steady beat, stereo distortion with a bit of the same on the vocals plus a little reverb, the spirit of Subsonics lives on!  As it does as well in the following Electric Shit With Walter Daniels putting La Bonda... on the chopping block.  You get the AM radio in a passing car about 3am kinda feel. A slice of heaven to be devoured!

Comedic feel on a serious as an overdose topic closes the album out with Black Mekon - Do You Think I'm A Junkie. As a tribute, this is a great album.  Can't say I've heard Volume one, though I may have.   Volume two though, double thumbs up!  Long Live Subsonics!!! 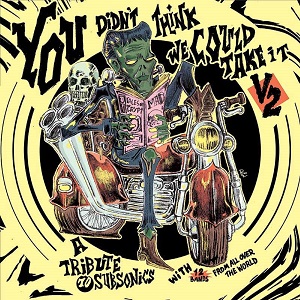