Some may remember the band L.A. Machina, they had a record out on Alternative Tentacles a while back.  I remember seein' one sheets for it online but don't think I ever heard the band.

Suzi Moon was in that band and is now releasing her first solo EP via Pirate Press Records.  It's tough, a bit dirty, and rocks! Suzi has been at this a while, developed something of a pedigree first forged along the lines of a Wendy O' Williams or an L7. The later though she's probably a bit more street punk, maybe more a Betty Blowtorch kinda thing.

I'd say she's all her own hell cat though.  She pretty much lets you know that on opener "I'm Not A Man". The attitude only grows from there with "Nuthin' To Me" following.  The devilish deal is sealed on the single "Special Place In Hell", where Suzi let's ya know you do her wrong she'll cut that ass! 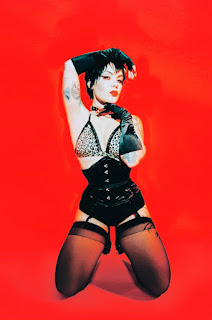