A few times you may hear things that feel really pro tools, but no idea if that software was deployed in making these recordings.  Overall this is a pretty strong album, if you like melodic metal that much stronger. La Torre has always been a power singer in Queensrÿche and all his bands prior, and there are no disappointments here.  If you're into riff-age from start to finish this album has a ton of it. The double white vinyl is a definite collector's item (just a heads up).

Much is said about this being his first "solo record" but like I said he's been a presence and key member of a few bands before Queensrÿche.  In fact as I listen to this album some of it reminds me of those earlier bands, which is where I know of Todd La Torre from, he was in Queensrÿche A LONG TIME before I even realized it, probably not until The Verdict, and really not until I saw that tour and said that singer sounds and looks familiar....so it's strange to hear people refer to this as a "first solo record".

But there's definitely later day Queensrÿche all over this. Like said though, this metal is a bit more riff orientated though certainly with a similar yet varied sonic quality as to his day job stuff. Here too, I've read a few reviews which say this sounds nothing like Crimson Glory or the former mentioned band, or just in a spot or two.  Nah to me sounds just like 'em, but it is what it is another band, with the singer from those bands. Whether that is a curse or plus to you depends solely on if you hear things in perspective.

For me the album seems to have some central themes, it calls upon the deep, dark overtures in spots a bit, and touches on both the garage looseness and technical tightness giving it a unique flow from start to finish imbued with interesting textures of heavy, showcasing La Torre's vocals as well as his excellent playing skills. He does a lot of everything on this record. Most of it is his, and Craig Blackwell's playing.

This album to me DOES sound like something which has been worked on for a long time.  Rare are any songs on here which feel unfinished arrangement and playing wise.  When I found out indeed it has been in the works for a number of years, that did not surprise me because it has a simple solid quality that presents itself the length of the disc.  It took a bit of time.

It's probably good enough too, to stand the test of these times. Coming at a time when there is fertile ground and tons of new stuff arriving from people holed up finishing stuff in the studio over this past year, and running, as covid has shook the world.

Lots of good stuff too, has come out and is coming out.  You can put this in that bin.  Pretty good stuff. Score one for La Torre. 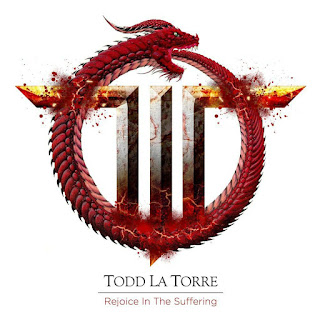