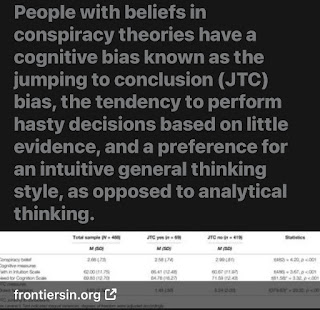 Sure many do. My father knew someone who lost their career back in the early (or was it the mid) 60’s because dude said the CIA was experimenting with narcotics on citizens on US soil. Back then that was pure nonsensical conspiracy theory . We know better now. Same will come from the use of electromagnetic weaponry by the government on its own people happening now. PhD’s in your fields are as well too often eager to believe their own bias jumping to’s....it can be tough, I know to deal with a strange reality one says no way in hell science says nada cum yada....can not only be hard, not popular and make you look crazy, but jeopardize your life and career. In the rare instance though, are those with theories about conspiracy who don’t know honestly WTF they are talking about. They can if they’re enough of them with varying degrees of bias and ignorance, help continue or increase the harm the loonie tooners who they call conspiracy theorists cause.